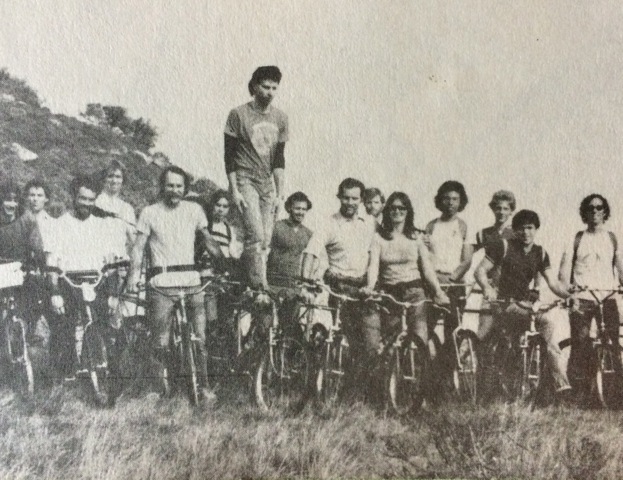 Back in the Day

I’m working with a young customer at the shop, he is asking if we can do a certain operation on his bike. We start to discuss what the problem is on his bike and whether or not we will have the parts we need to do the work. I need to know the age of the bike so I can figure out the details. As he describes the age of his bike he says something about “back in the day”. This is a phrase that always sends me just a little bit, especially when the person saying it is fourteen years old, just how “back” can it be? Zap back in the day, I look out the window of the shop and everybody riding by is on velocipedes. These were some of the earliest bicycles during the Victorian age. They resembled a bicycle of today only in the fact that there were two wheels, a handle bar and a place to sit, but there weren’t any pedals. To move forward you simply walked while seated on the machine holding the handlebar, which on the earliest models didn’t even steer the front wheel, you had to lift the front end to make a turn. Of course my vision of everybody on the street outside on a velocipede could not have been true because only the very well off could have owned one of these fancy new machines at the time.

Zap back in the day, the vision melts away, it goes to a slightly later period, 1866. I see the Buffalo Soldiers of the ninth and tenth cavalries. These were the black soldiers who were given some of the burliest jobs during the war. One of those jobs involved trying to find a new way for a cavalry to travel overland, well not just overland, over the Rockies, without roads or trails in many cases, and they had to do this on bikes with one gear and wooden rims and at the highest altitudes, in snow! Not only was the bike very basic and the terrain difficult and mostly untraveled, they had to carry all their own provisions and weapons. And the folks in Marin county thought they had the first mountain bikes, not by a long shot.

Oh here it goes again, zap back in the day, not quite a hundred years later, 1949, I can see a woman riding her brand new Schwinn, blue and white, balloon tires, rack on the back with a basket containing a few groceries, this is the deluxe model, you can tell because as her neighbor passes by in his Ford pickup belching out clouds of nasty smoke, he waves to her, she reaches down to the electric button on the side of the imitation gas tank and honks her horn back at him.

I own that bike today and it still has the same tires and seat and grips. The horn even works, I bet that Ford truck isn’t around to pollute anymore!

Suddenly I realize my young customer is looking at me kind of funny, oops I must have gone away for a second there. He is probably thinking, ”C’mon old man, where are you?” He points to the broken part. His bike is a cheap little bike, nothing fancy, just his bike that he loves and has taken him many places he needed to get to. And from the look of things has provided some fun times too. How great is that, something cool, fun and functional. There aren’t that many things in life that can be all those at once for a person. We are able to do a fix right away for his bike, this makes him rather happy.

As he is headed out the door he says something about his dad telling him about the mountain bike he used to have back in the day. Zap. I can see three of us on our original mountain bikes riding over the Tahoe Mountain trail, clunkers they were called at the time. We had built these ourselves before production mountain bikes were around, and just a little later than the folks in Marin County. They were built on old beach cruiser frames with at the time a strange hodge podge of parts which allowed us to get to places we couldn’t before. A lot of people laughed at our weird bikes and a few people asked us to build them one. I still have one of the original clunkers from 1979.

As I turned to go back inside the shop there next to the door sat my modern Santa Cruz VP Free, eight inches of travel, disc brakes, all those gears, and the ability to go up and down so well. It got me thinking about how much the mountain bikes have changed, I had a picture in my mind of those two bikes sitting side by side, then the picture expanded to include the velocipede, the buffalo soldiers bikes, the 49 schwinn with groceries, and my young customer’s bike since he was the one who sent me on this journey in the first place.

I’d better get back to work, enough daydreaming, and if you ever hear me say that phrase, you know which one, just pinch me on the arm or something, I’m pretty sure I will come right back.

One more quick note. Every year this “ride your bike to work week” comes along. I would like to propose that everybody around here rides their bike to work at least one day a week all summer long. What a nice difference that could make for our terrible summer traffic. And it could get to be a habit!