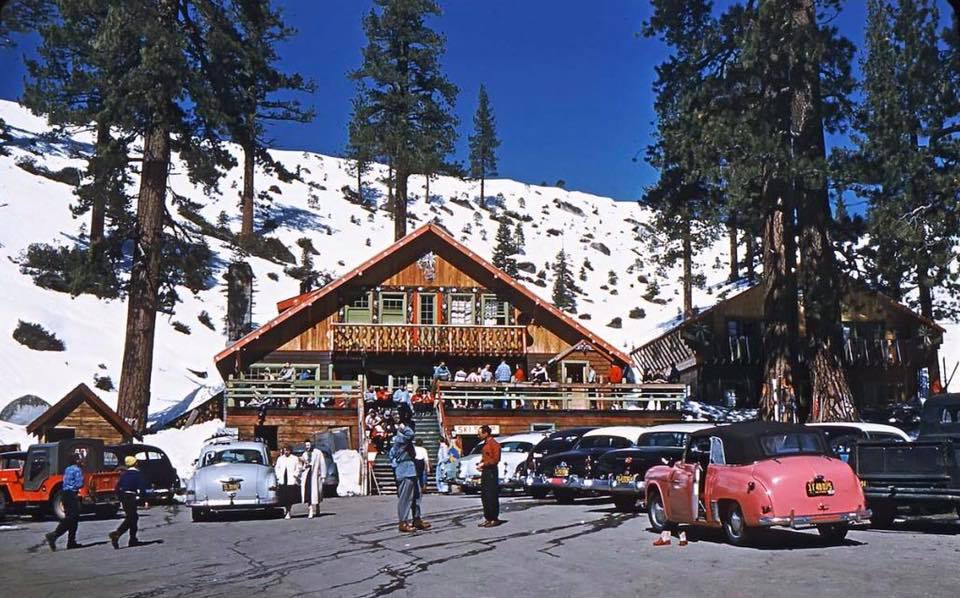 How many times have you driven past those big sweeping curves on highway 50 between Twin Bridges and Camp Sacramento and wondered, “Hmm, it looks like there used to be something else in this area.”

I have for years, then one day an old ski buddy who lives in Oregon (he no longer skis but also lives part time on a boat in warmer parts of the planet) sent me a link to an old movie of the area. It totally changed my perspective of that zone when I pass through now. Of course, there is my problem of being infatuated with skiing history. Yes there was something there, back in 1941, Fred Baumhoff opened the Strawberry Ski Hut. There was a beautiful little lodge and initially four rope tows. It is important to understand that at this period highway 50 was a narrow and steep road and winter storms would usually close the road for the winter from Twin Bridges up over the summit to South Lake Tahoe. That was okay though because people eager to be part of the new exciting world of winter recreation were willing to drive up the challenging road to try one of the newest ski hills on the west coast!

The first ski hill in the U.S. was Howelsen Hill in Colorado in 1915,  Granlibakken in Tahoe 1927 was one of the earliest then Soda Springs in 1935, Snow valley Mountain Resort and Mountain High in Southern California in 1937 and Sugar Bowl 1939. This was the start of an explosion of ski hills around the country. Between 1940 and 1960 and estimated 82 resorts opened with another 107 in the 60’s, many of course were short lived but others grew to be some of the giants we know today.

This made the Strawberry Hut a wildly popular little hill so soon after it became the Edelweiss Ski Lodge. In 1950 Lutz Aynedter immigrated from Germany as a very successful ski racer in Europe and became the chief ski instructor at Edelweiss. He brought with him the European ski technique which he taught to many adults and kids here. One of those kids he taught was a local kid whose father was the Highway Patrol officer who patrolled the road from Kyburz to Echo summit. The family’s three kids went to school in Kyburz, the two brothers, Steve and Spider were alter boys at the Chapel of our Lady of the Sierras across from the ski hill and would always head straight to ski after mass. Steve, Spider and their ski buddies came to be known as the Highway 50 boys and yes this was who became the wildly successful and famous ski racer Spider Sabich! Of course, there is so much more to that story.

It was 1954 when a double chairlift was put in at Edelweiss to “whisk skiers to the top of the mountain” which brought the hill to another level.  One of the cool things this new addition did was it allowed Lutz to guide clients on a ski run called the Lovers Leap Run, a trip that started with the chair ride up, then a bit of cross country climbing, and a spectacular drop down to Lovers Leap and then return to Edelweiss via the old wagon road, sounds like my kind of skiing, keep in mind what kind of gear these adventuresome skiers were on…wood and leather, yeah all you backcountry skiers that think you are doing something so new and challenging…not so much!

So along with all those other ski hills opening over the years, 1946 was when two brothers, Ray and Floyd Barrett opened Sierra Ski Ranch at the very top of Echo Summit. They ran for a bit there until 1953 when an employee named Vern Sprock and his wife Bobby bought the resort and moved it further down highway 50. The Sprocks changed the location a few times, once because the highway was going to go through a major widening project, finally in 1968 they moved to the current location we know today as Sierra at Tahoe.

There was another major event that took place in 1955. This was the opening of Heavenly Valley. Skiing was really growing but the other resorts opening began to take a toll on the Edelweiss customer base. Then there was the highway widening project which would have a major impact on the little ski hill since it would cut right through the middle of the base area. Ah and just to top things off, the D word. No this is not something new to this day and age, it is the Sierras and big winters happen and dry winters happen, wham they got a couple dry ones in a row. It was all too much for the little ski hill that had given so many people great experiences and memories and a lifestyle that many of us strive for today, so in 1963 Edelweiss shut down.

The chair lift was sold to Hoodoo resort in Oregon, the lodge and other buildings fell into disrepair and I believe it was 1968 when the Forest Service burned them down. It is so sad that a beautiful  historical building like that couldn’t be preserved and made into something else wonderful, in Europe that would still be there making people happy. Oh us Americans are just to difficult to make happy!

Well now when I drive past that area, I can feel the vibe, the excitement and fun coming from a special little hillside. I wish I could pop back there for a quick little ski around with Lutz and Spider!