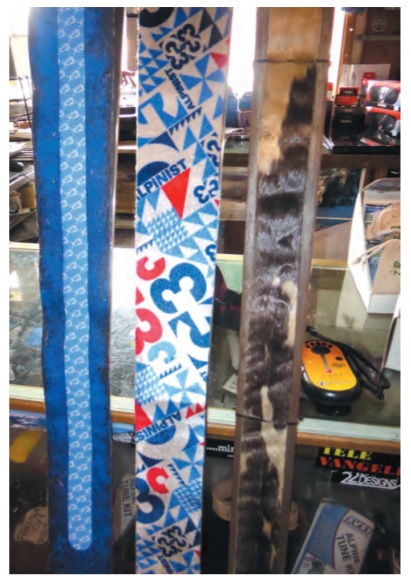 The Skinny on Skins 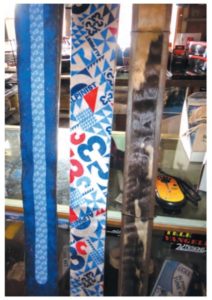 This is the day you have been planning for weeks to climb that peak and ski a line you have never tried before; friends have made it to the gathering spot, everybody is healthy and well coffeed-up, the weather is perfect, the snow is perfect and the dogs are getting along great.

About an hour into a strenuous but beautiful climb, you hear some expletives coming from somewhere just behind that you really don’t expect on such a blissful morning. Oh no, what is going on back there? It’s quiet for another ten minutes or so, and then – “SMICKIN FRAKIN GODOLAG UH” (You know what I mean).

Everybody gathers around the unhappy skier. “My skins keep coming off my skis!” he says, holding one ski with the skin hanging off the tail of the ski. Oh, that would certainly make you say bad things on a beautiful morning.

For those who don’t know, skins go on the bottom of a backcountry ski to provide traction for climbing. They are called skins because at the turn of the century they were made of animal hide, which had short hair that provided very effective traction. Nowadays, they are all synthetic, still comprised of very short hairs, all lying in one direction, which allows the ski to slide forward and not slip backwards. They stick to the bottom of the ski with this rather amazing glue.

Ah yes, this amazing glue. Skin glue has a difficult job to do. It has to stay on the skins first of all, but then it has to stick to the base of a ski in all conditions – cold, really cold, sometimes wet conditions, and often to a ski base with wax on it. When you reach the top of your climb, it has to come off of the ski without leaving any trace of glue on the ski; then you fold the skin over on itself, glue side to glue side, where it has to remain for perhaps an hour, wet but ready for your next lap, which could be days, weeks or months. When pulled apart, the glue releases from itself but stays on the skin, ready to stick to that ski again – better living through chemicals, wow!

This glue is crazy stuff, but it needs our help to work properly and for its lifetime, usually three or four years before it has to be renewed. So, what kind of help does the glue need? First and foremost, keep the glue clean; everything else wants to stick to it, too – dirt, dust, dog hair, pine needles and more – so, keep ‘em clean. Next, dry your skins out between uses. Peel the skins apart and let them dry, but keep the glue surface out of sunlight as UV is harmful to the glue. It is very important to avoid high heat on the skins; sitting close to a car heater or in the back of the Subaru while the sun heats the car up will rapidly destroy the quality of your skin glue.

Proper storage is the next important key to happy skin glue. Skins usually come with skin savers, which is that mesh stuff. The idea is that if you stick those skins together, over a period of time, the glue will bond to itself stronger and stronger until when you pull them apart to use, the glue will try to pull itself apart, degrading glue quality (leading to bad words out in the mountains). If you are going to store your skins for more than a couple days, stick them on the mesh skin savers, and once they are dry, put them in the bag and keep them in a cool spot.

The glue will not last as long as your skins. The glue can at that point be renewed, which is a rather unpleasant and somewhat difficult process. It can cost nearly half as much as a new pair of skins if the old glue is really contaminated and difficult to remove, but it is the right way to deal with diminishing glue power.

The moral of the story is to love and respect, but don’t sniff, your glue.

We were actually able to continue our trip on this day because a couple of us come prepared for this sort of eventuality – putting a few strips of duct tape around the tail of the skins for our unhappy companion. Our dogs just give us the funniest looks like, “Come on you guys, always fiddling with all your stuff – let’s go!”

This was one of those where a little difficulty early on just added some character to the whole trip, and yes, we got to do that line, and no, I’m not going to tell you where it was – ha ha!